If you are following a low carb diet, you know how difficult it can be to satisfy that sweet tooth sometimes. Several years ago, a co-worker told me about these cinnamon snacks and I've been making them ever since. When I tell you the ingredients, you may think I'm a little nuts, but seriously, they are good! (I can't say they are good for you, but there is a lot of debate about low carb diets and the amount of fat in them.) 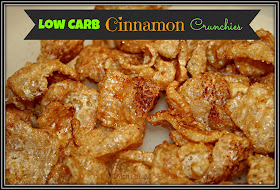 These are similar to the cinnamon twists from Taco Bell. Can you figure out the main ingredient from the picture? Pork rinds! Yep, I'm not kidding... 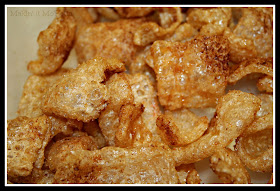 You can also place the coated pork rinds on a baking sheet and heat for a few minutes to make them warm and extra crispy. You can also do this if they start to get soft and they will crisp up again. Ours usually don't last long enough! You may need to play with the cinnamon-sweetener ratios to get your desired flavor. Check out my Low Carb/Diabetic Friendly Pinterest Board for more recipes and ideas!
Kim of Mo Betta at 10:25 AM